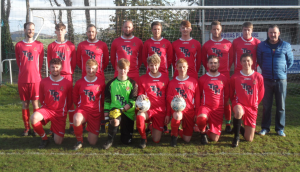 Jordan Hadaway and Ethan Jones join us as joint-managers of the First Team and will take over from Shaun Davies for the 2019/20 season. Shaun has done a very good job by keeping the team going and competing well in all games. It was a good end to the season with a big 7-2 win, which saw the team finish on a four game unbeaten run and a potential 5th placed finish (depending on results elsewhere).

Jordan joins us from Holywell Town where he is currently assistant coach with their successful Reserves Team and is the Youth Director for Holywell Town Youth. Jordan will continue in his role as Youth Director at Holywell Town Youth next season. He is currently close to finishing his UEFA B Licence qualification and is also the current North East Wales FA Coach of the Year. Jordan said, “I am looking forward to challenging myself at a club with a long history behind them, when this opportunity arose I couldn’t turn it down as it is a big step up in my coaching career. I know from being local to the area that Caerwys has a committee full of hard working people that are committed to the club and are looking to move the club forwards. I look forward to sharing my first step in first team management with Ethan, we will be putting a lot of work in from day one to ensure that our team is fully prepared for next season.”

Ethan joins us from Ruthin Town where he has managed the Colts/Development Squad to a strong finish this season and has 5 seasons experience within the Ruthin Town Youth set-up previously. Ethan also spent 2 seasons with Bala Town Academy, in which his team won the national Academy Cup and the elite Super Six League. Ethan also holds a UEFA B Licence. Ethan said, “I’m looking forward to taking my first steps into first team management. Having spoken to Chris, Dylan and Rich about the club and their ambitions it was clear that we were a good fit. Having met Jordan through the UEFA B Licence I know we’ll be a good management team as we like to play the game the same way and are totally on the same page. The challenge at Caerwys is one that really excites me and I’m really positive about what we can achieve here.”